SPOKANE, WA / ACCESSWIRE / December 8, 2021 / Goldrich Mining Company (OTCQB:GRMC) ("Goldrich" or the "Company") is pleased to announce the Company has submitted a permit application to the Alaska Department of Natural Resources ("DNR") to carry out a multi-year, 25,000-foot diamond core drill program at the Company's Chandalar Property. Upon approval and subject to financing, Goldrich plans to commence an initial 12,000-foot program in May 2022.

The target zone of the drill program, located on the Little Squaw Creek ("LSC") drainage, is immediately above and partially overlapping the LSC placer deposit and mine - historically among the largest placer deposits and producing placer mines in North America (see "Goldrich Mining Releases Initial Assessment Report; Results Indicate Robust Project Economics of US$64 Million After-tax NPV" news release dated June 11, 2021). The target zone sits at the heart of a zone surrounded by historic placer workings in every creek and four historic hard-rock gold mines. The angularity of the placer gold nuggets also indicates close proximity to a hard-rock source. 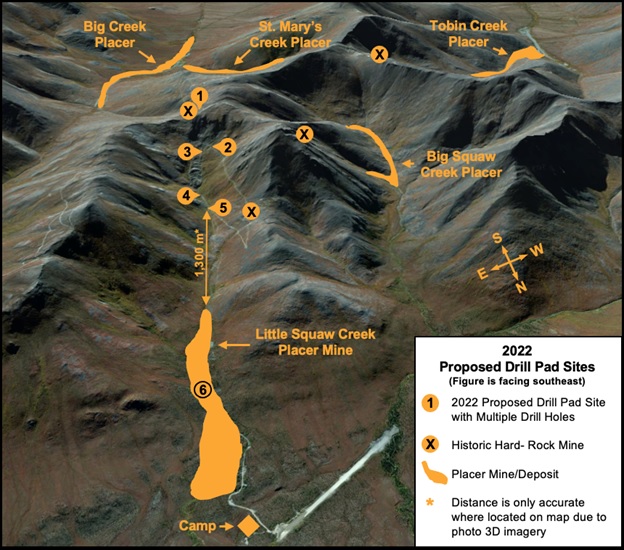 Recognition of the Chandalar magmatic-hydrothermal alteration system comes from considering a raft of geologic factors including structural, petrographic, geochemical and geophysical evidence - including previous lode drilling in the upper reaches of Little Squaw Creek that discovered significant zones of gold-bearing pegmatitic dikelets (< 2 feet thick), often associated with heavily chloritized schist with gold and gold associated (arsenopyrite) minerals in them. The small dikes are composed of quartz, siderite and feldspars that are completely hydrothermally altered to clays. Importantly, the dikelets contain high-temperature accessory minerals indicative of intrusive association, notably xenotime and baddeleyite.

A similar conclusion of the intrusive-related source of the gold is expressed in Alaska Open-file Report 158 entitled "Source of Lode and Placer Gold Deposits of the Chandalar and Upper Koyukuk Districts, Alaska", 1982, by John Dillon and published by the DNR. Mr. Dillon concludes "The most likely prospects for further gold deposits are in the roofs and cupolas of granitic plutons".

It is noteworthy that the United States Geological Survey ("USGS") Open-File Report 66-53 included considerations that the Kobuk Trench may be an offset or splay of the Tintina fault system, which province holds many giant gold deposits that are an important driver of Alaska's economy. The Chandalar gold district is proximal to the Kobuk Trench, and as such may host similar gold deposits.

The proposed diamond core drilling application involves six drill pads from which multiple holes may be completed. The drill sites are in mountainous terrain with elevations ranging from about 2,600 to 4,650 feet. The drill pads are shown in Figures #1, #3, and #4 and the geographic coordinates of the drill pads are listed in the table of proposed drill pad sites (Fig. #2).

Most of the proposed drill pads are currently situated at either mine sites, wide spots in existing roads, or former drill sites. Tentatively, the drilling campaign will start on proposed drill pad site #3 (Fig. 1). Thereafter, drill hole placements and sequencing will be contingent on the geological findings of prior drill holes. A combination of angle and vertical HQ size drill holes could be used on any site, probably with reductions to NQ size holes for the longer holes. Drill hole penetration could reach up to 3,000 feet vertically below surface. The sum total footage of some combination of vertical and angle drill holes is expected to reach approximately 25,000 feet. The drill program is a multi-year program. Each drilling campaign will be confined to summer seasons between approximately May 1st and September 30th of each year, subject to weather.

Because the Chandalar mining district is well-served by a system of developed and well-used access roads and pathways connecting all the historic mines and most prospect diggings, there is no need for a helicopter-supported drill program. The existing network of old roads and track trails can be used for accessing all of the proposed drill pad sites. At this time, no new accesses are anticipated to be constructed. 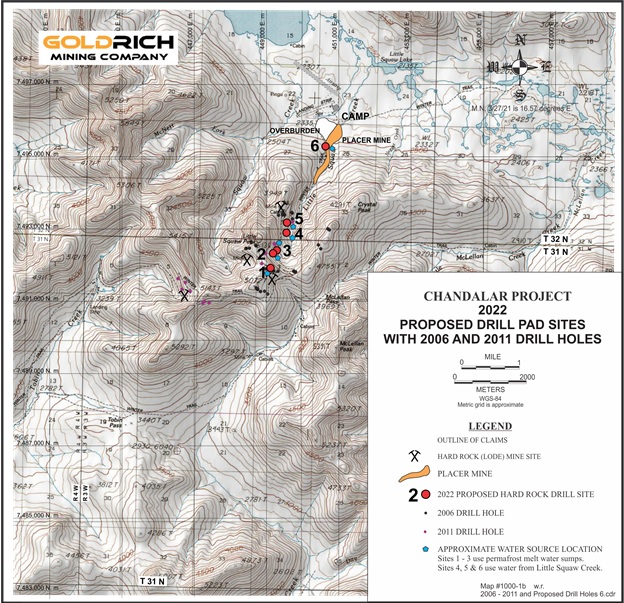 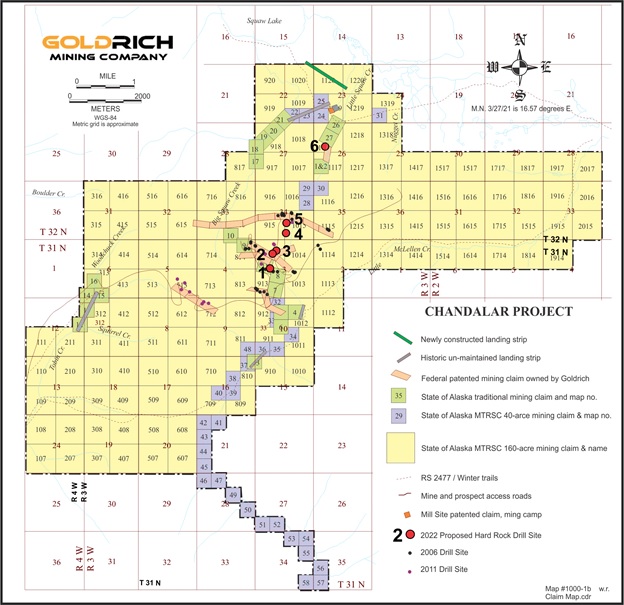 Goldrich Mining (OTCQB: GRMC) is a U.S. based resource company focused on developing the Chandalar gold district in Alaska, USA. The Company controls a land package spanning 23,000 acres of highly prospective gold targets and historic mines. Goldrich's primary focus is the exploration and discovery of the hard-rock (lode) targets, which are the source of the placer deposit, while working to also build shareholder value by monetizing the placer assets.

For additional information regarding Goldrich Mining Company or this news release, contact Mr. William Schara via telephone at (509) 768-4468 or This email address is being protected from spambots. You need JavaScript enabled to view it..

This news release contains “forward-looking statements” within the meaning of the Private Securities Litigation Reform Act of 1995. Such forward looking statements concern use of proceeds and potential exercise of the warrants. These statements relate to analyses and other information that are based on forecasts of future results, estimates of amounts not yet determinable and assumptions of management. Any statements that express or involve discussions with respect to predictions, expectations, beliefs, plans, budgets, projections, objectives, assumptions or future events or performance (often, but not always, using words or phrases such as “expects” or “does not expect”, “is expected”, “anticipates” or “does not anticipate”, “plans”, “estimates” or “intends”, or stating that certain actions, events or results “may”, “could”, “would”, “might”, “should” or “will” be taken, occur or be achieved) are not statements of historical fact and may be forward-looking statements. Forward-looking statements are subject to a variety of known and unknown risks, uncertainties and other factors which could cause actual events or results to differ from those expressed or implied by the forward-looking statements. Investors should not place undue reliance on any forward-looking statement and should consider the uncertainties and risks discussed in in the Company’s latest Annual Report on Form 10-K and Quarterly Report on Form 10-Q under the heading “Risk Factors”, filed with the U.S. Securities and Exchange Commission (the “SEC”) and available on the SEC website or www.goldrichmining.com, as well as the Company’s other SEC filings. We disclaim any obligation subsequently to revise any forward-looking statements to reflect events or circumstances after the date of such statements or to reflect the occurrence of anticipated or unanticipated events, except as required by law.